Moving Forward by Everett L Worthington Jr. is a book about forgiveness. How to forgive yourself.  I’ve been reading it, page by page, all summer. I was looking for ways to identify with his story, to help my husband, with a tragic suicide death.  Maybe because I’m a woman, I have a hard time identifying with him at all. Over analyze? Over Clinical? Self Forgiveness of Self – is too much for me. This seems to be a very in depth step by step transparent journey to how he forgave himself after the tragedy in his own life.  Maybe since I don’t battle with personal forgiveness it didn’t strike a cord with me. I’m choosing to post  my review, half way/ 3/4 way through the book and move on.  Ha. Or rather Move Forward.

I received this book for free from Bloggingforbooks.org.

Posted by Pebblekeeper ~ Angie at 4:06 PM No comments: Links to this post

Email ThisBlogThis!Share to TwitterShare to FacebookShare to Pinterest
Labels: Forgiveness

The Secret Keeper, a Review 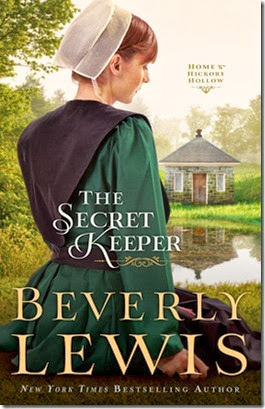 The Secret Keeper, from Bethany House part of the Home to Hickory Hollow.

I so enjoyed this  - and I rarely do with a series. It felt like I was coming home to Hickory Hollow with familiar characters.

This book is different.  The main character has been visiting and corresponding with a girl from Hickory Hollow for several years.  In her Englisher life, she has cut down to the most basic simple lifestyle. Her desire is to be Amish, making it through the Proving, and be baptized and join the church.

This story gently pulls you through what the Proving Process looks like. How the community reacts to an outsider, how fear and trust, faith and hard work intertwine.  As she learns that not all of ‘The People’ are perfect and without sin, there is question in her heart if she will ever measure up. Although the book is not centered around a beau, there is a character that gives her attention and you wonder through the book if they will get together. There is no pining over him, and no long drawn out ‘thought’ script of romance.

I believe this book could stand alone, or be the best thing since sliced bread if you’ve read other books in the series.  Beverly Lewis has done it again! Well Done!

I received a free kindle version of this book from Bethany House in exchange for an honest review.

Posted by Pebblekeeper ~ Angie at 3:52 PM No comments: Links to this post

I enjoyed Grace Unplugged.  I think the audience for Grace Unplugged and Own It is more for the teen crowd, especially young ladies. If you have a young lady in your life that loves to devour books, this would be a great one for her. I have read several like the Own It book, and I think it is critical for teens and new Christians to come to terms with what they believe and why. Owning your own faith a part from your family or mentors.

About Grace Unplugged the Novel

Grace Trey is an 18 year old singer as passionate about her Christian faith as she is her phenomenal, God-given musical talent. Both traits come from her father, one hit wonder Johnny Trey who found Jesus after losing his chart success two decades ago.

When Grace encounters her own music break of a lifetime, the sudden dive into the "real world" puts her deeper beliefs to the test. Pop superstardom is just within reach but appears to require some spiritual compromise. Will Grace reject her faith, or will she own it?

Grace Unplugged is based on the motion picture of the same name starring AJ Michalka (Super 8) and Kevin Pollak (A Few Good Men) with performances by award-winning artists Chris Tomlin and Jamie Grace.

About Own It, Discover Your Faith in God

The movie Grace Unplugged tells the story of Grace Trey, an ideal Christian teenager who is also a phenomenal singer. But when she is pushed into the “real world” at the tender age of eighteen after getting the music break of a lifetime, her faith is put to the test.

Own It mirrors the film by asking what it means to really “own” your personal faith rather than just automatically following in the footsteps of parents, friends, or other influencers. Best-selling authors Hayley and Michael DiMarco help readers understand what to do when faith meets real world challenges.

Without solid beliefs, poor choices are likely to follow. You must take the time to really know who you are, who you are becoming, and who God made you to be. It's your personal faith . . . own it!

About the Grace Unplugged Author

Melody Carlson has sold more than five million books. A professional writer for twenty years, she recently received the Romantic Times Career Achievement Award. Melody has two grown sons and lives with her husband in the Pacific Northwest.

About the Own It Authors

Hayley DiMarco is the best-selling author of more than thirty books including Dateable, Marriable, Mean Girls, and The Woman of Mystery. She has been a featured speaker at Women of Faith, Precept National Women's Conference, and MOPS Intl. among others and has consulted on the creation and enhancement of some of the largest stadium events for teens and young women in North America.

Michael DiMarco is a skillled communicator and teacher who has authored more than a dozen bestselling books including the 2010 Christian Bookof the Year for Youth, B4UD8 (Before You Date). He and his wife, author Hayley DiMarco, have one daughter and live in Nashville, Tennessee.

Posted by Pebblekeeper ~ Angie at 8:54 PM No comments: Links to this post

WIN:  Winner Announced
The Orkin Home Education Kit includes:
• 2 Orkin Factoids 11x17 Posters
- Poster #1 - The Pollinators
- Poster #2 - The Recyclers
• 1 Orkin bug-finding flashlight
• 20 Rubber Toy Creepy Crawly Bugs
Be your own Orkin man! Use the flashlight and fun posters to learn about how every creature plays a part in our ecosystem.
To Enter:
Winner is Purple Squirrel
Comment on this blog post – One Entry
Comment on the post on http://www.facebook.com/Petra.School
The prize will be sent via FedEx or USPS. No P.O. Boxes please. I am working with Orkin and Orkin supplied these materials to me for posting the app on my blog. I received no product or compensation – just passing a perk to my readers.

Posted by Pebblekeeper ~ Angie at 8:16 AM 9 comments: Links to this post