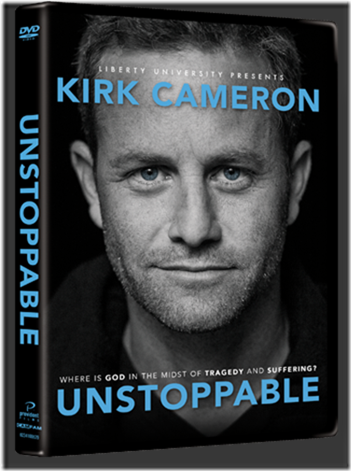 I was stoked to be available to review the movie Unstoppable by Kirk Cameron. The boys and I were away on a surf trip when the movie arrived. I planned for a day when all four of us would be free to watch the movie together.

With all of the hype that we’ve seen from Cameron about the film, I was on the edge of my seat, waiting to be encouraged, excited for the boys, excited for hubby – Excited.

The movie is played out slowly in the beginning. Kirk walking around talking about coming home to find out his friend’s son had passed away due to cancer. He tears up and wrestles with the question of “Where is God”?

We are swept to amazingly graphic images of Genesis. Truly, this is is the one saving portion of the film, the portrayal of creation, man’s creation, Eve’s appearance. Wow. Stunning cinematography.

However, my family was asking  a bigger question of ‘What”. Everyones eye brows knit together as Kirk tells us that since the beginning of man, we were destined to sin, death, separation, murder, death. It’s OK that we face death today, because we’ve been facing it since Genesis. It’s OK that we have a smidgen of hope now, because God had to kill his own son to make death a little more bearable. Death. Destruction. Lies. Murder. Gore.

And I’m watching with 2 tween boys and my husband. And they are a bit weirded out about the film. I would definitely not watch it with young children.

I was asking myself – who is this film written for? The pre-believer? If you didn’t have a reference to the Biblical stories, much of the film would not make sense. My 13 year old son had to keep asking what was going on, and we’d explain what story Kirk was on, and he’d get back into it.

Is this film for the believer? Is this to encourage the believer? The stories ,although beautifully executed are pretty much elementary Sunday school lesson stuff.

There is a section where he talks about Noah’s Flood and we all agreed that Grandma didn’t stop class to really think about what it would have sounded like while all of the people drowned.

He wanted us to see that death has been a part of every story. Since time began.

There were scenes, I hope, recreated of his friend’s funeral. It just seemed so creepy. Like we were peeking in on their suffering. Or that Kirk was using their suffering to promote this film. All four of us turned away.

I got up to do dishes and the boys rushed off to their activities. My husband spent time on the extras of the DVD. He said he was looking, to see if there was something we missed. It seemed that the only thing unstoppable is death and hurt and sin. I know we were supposed to get that God is Unstoppable even though there is sin that caused death, but it was pretty heavy the other way. So very visual.

I posted on FB wondering if I was the only one? Was I the only one that found this highly promoted film just a bit – off? Many of my friends chimed in that they felt the same way but felt bad to talk against a project of Kirk Cameron.

I don’t recommend this film for kids. Or teens. I don’t recommend you make your husband sit through it. I think if you have a kid that wants to be in film, that it was amazingly made. I think Kirk gave a few images and questions to make you think outside of the box. Like – if Adam and Eve took the advice of an animal, a beast, is that why God made them clothes from the beasts, so they could resemble who they followed? Um. I guess that’s something to think about.

Inspired by the death of Cameron’s close friend who succumbed to cancer at the age of 15, Kirk Cameron takes viewers on an inspiring and hope-filled visual journey to better understand the biggest doubt-raising question in faith: “Where is God in the midst of tragedy and suffering?”

Going back to the beginning—literally—Kirk investigates the origins of good and evil and how they impact our lives … and our eternities. UNSTOPPABLE will prompt audiences to consider the role that pain and suffering has in our lives, as they affirm their personal views on faith, and encourage conversation starters about God, suffering, and hope.

Disclosure (in accordance with the FTC’s 16 CFR, Part 255: “Guides Concerning the Use of Endorsements and Testimonials in Advertising): Many thanks to Propeller Consulting, LLC for providing movie, My opinions are 100% my own and NOT influenced by monetary compensation. I did receive a sample of the product in exchange for this review and post.

Posted by Pebblekeeper ~ Angie at 4:45 PM